Write an essay of 160~200 words based on the following drawing. In your essay, you should

2) interpret its intended meaning, and

You should write neatly on the ANSWER SHEET. 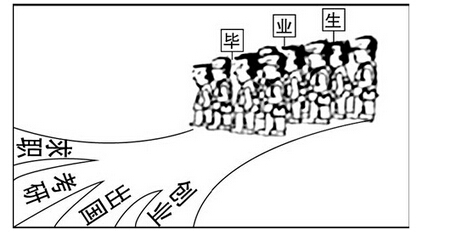 Recently, there has been a growing concern among the public over the TOPic of the choice after graduation. As is described in the picture, a group of graduates are facing various roads to go, such as searching for jobs, pursuing further study, going abroad and becoming entrepreneurs. The picture intends to convey us that, as adults, college graduates have to make their own decisions about future life.

After graduation, college students should choose future life based on their own realities and dreams. For those, who are eager to become economically independent and to put into practice what they have learned in college, taking a job or doing poineering work may be satisfying and rewarpng. Getting established as a bread-winner after graduation is their main desire. By contrast, others who want to take advantage of the favorable conptions in college, however, ought to try to enroll in graduate programs inside or outside. For them, a Master's degree or even a Doctoral degree represents a much more ambitious goal than a bachelor's degree, because they cherish lifetime success and interest more in academic achievements than money.

It is sensible that we should take a rational attitude towards the decisive choice. For the part of my own, getting a higher degree abroad has long been my dream. I’m a strong believer that one should do more research and learn more while he or she is still young.